Toronto Trip, Part I: The ROM

We visited Toronto from October 11th to the 15th. It took about 8 or 9 hours to drive there, and sitting in the car was really boring!! I was glad to finally get to Toronto. For dinner that night, one of the things we had was poutine. It was good, especially the cheese bits. 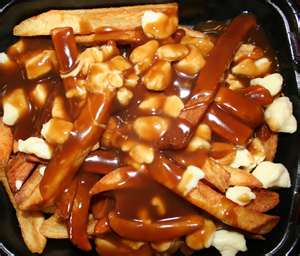 Poutine. It tastes better than it looks!

The next day, the 12th, we went to the ROM (Royal Ontario Museum). It’s kind of like the Field Museum in Chicago, if you’ve been there. 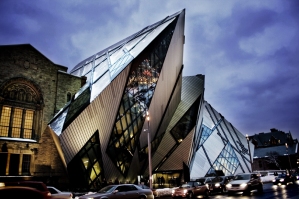 I took some black-and-white pictures of the outside of the ROM, and they looked really good. I don’t think the building looks so good in color, but it looks neat from every angle in black-and-white.

My really good photo of the ROM!!!!! Click on it to see it in more detail.

We saw exhibits on dinosaurs and other prehistoric creatures, mammals, endangered species, and minerals and gems on one floor. 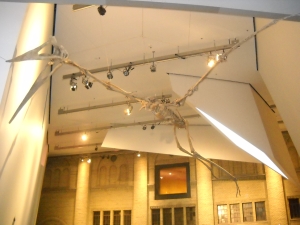 This would be the best dinosaur to have as a pet. I would fly around on it, and we would have lots of fun. I think I would name it Ralph.

Neville with a life-sized model of a baby dinosaur. 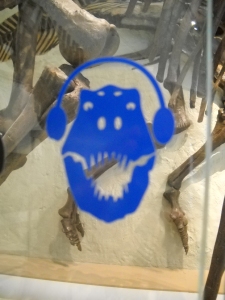 This sign let the museum-visiting dinos know to put their headphones on. 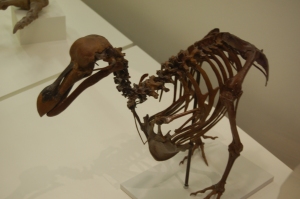 We also saw some exhibits on African, Middle Eastern, Asian, Ancient Greek and Roman, South American, and European art and culture. We saw a Ming tomb, which I though would be really cool, but it wasn’t as interesting as I had hoped.

3 Responses to Toronto Trip, Part I: The ROM