Read All About It – Local Girl Marries A Prince: Teens Can Write, Too! August 2012 Blog Chain 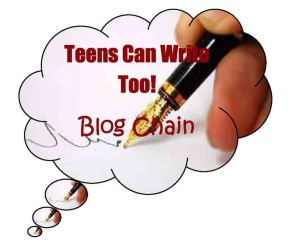 Due to being just as busy this month as I was last month, I requested an early posting date in the Teens Can Write, Too! blog chain. I was surprised by this month’s topic because it doesn’t seem like there have been many topics about actually doing creative writing, except for one with a character interview. But I like the topic for this month!

“Write a retelling of your favorite fairytale, myth, or legend.”

That is what I was trying to do for my 4-H Creative Writing exhibit this year, but it didn’t work out. However, I did this for last year’s exhibit, so… I didn’t actually have to write anything new for this post! I originally wrote this for an online creative writing class, then modified it slightly because writing in 4-H can’t be exactly what you used for anything that also gets a grade, like a school assignment.

Just yesterday, a young girl named Cinderella who once lived with her evil stepfamily married Fairytaleville’s very own Prince Neville.

Cinderella lived at 42 Grimm Lane with her father Arnold, her stepmother Arlene, and her stepsisters Vera and Edna. Arnold married Arlene about a year ago. However, shortly afterward, he disappeared. Arlene was suspected of telling the Big Bad Wolf to eat him, but she was cleared of all charges.

According to a neighbor, Puss N. Boots, “Arlene and her daughters are meanies!” Authorities say Arlene, Vera, and Edna made Cinderella wash dishes, take out the trash, and scrub toilets, while they didn’t do any chores. The Herald was also informed that Cinderella was forced to live a dark and smelly closet, but her stepsisters and stepmother lived in beautiful full-floor suites with crystal chandeliers and mahogany floors.

That all changed when Prince Neville hosted a series of balls, the first held last Friday. In an interview with the Herald, Cinderella explains, “Vera and Edna had already left for the ball and I was sitting at home crying because I wanted to go to the ball. Suddenly my fairy godmother appeared!”

Authorities could not confirm the identity of her fairy godmother, but they believe she could be Ms. Belinda Bubblebottom. She could not be reached for comments.

Cinderella continues, “She grabbed a pumpkin and turned it into a coach. Then she turned some of my sisters’ pet mice into horses, a coachman, and footmen. And she transformed my old T-shirt and sweatpants into a beautiful gown! She did tell me, however, that all these things would disappear by midnight.”

At the first of three balls, she certainly made an impression. Prince Neville says, “As soon as I saw her, I  just knew I wanted to marry her.”

His mother, Queen Madge, adds, “She was a lot prettier and nicer than some of Neville’s past girlfriends. Like the one who-“

“You know, Mom, I have no clue what you’re talking about. Anyway, she was so nice, much nicer than these two girls named Vera and Edna, and she was wearing these sparkly glass slippers. I like sparkly things.”

The second night of the ball was much the same as the first, but on the third night, Cinderella lost track of time and had to run away. In doing so, she lost a glass slipper. A close friend of the prince, Sir Howie Melvin, found the slipper and gave it to the prince. On Monday, Prince Neville embarked on a city-wide search to find the owner of the glass slipper.

Says Prince Neville, “I went everywhere, even the Three Bears’ house, to find the owner of the slipper. When I arrived at 42 Grimm Lane, Vera and Edna fought over who should try on the slipper first. Of course, neither one could fit their feet into the slipper.”

Sir Howie Melvin, who was there with the prince, says, “Cinderella asked to try on the slipper and her stepsisters made fun of her. But then the slipper fit her perfectly!” Arlene and Vera were shocked and left the house shortly afterward. They have not been seen in Fairytaleville since.

Prince Neville proposed to Cinderella right then and there. They were married the very next day in the palace. Says Cinderella, “I am so glad I will never have to wash floors ever again!” The couple’s future plans include designing glass slippers in all different sizes and starting an organization dedicated to improving relationships between stepfamilies.

I hadn’t read this story in a while, so I’d forgotten a lot of the little jokes. I also hadn’t realized that I was using the name Neville for stories as early as that. I suppose it makes sense, because this story was written in March 2011 and I started my blog in October 2010. I think this is one of my best pieces of humor that I’ve written so far. It’s just very me. Slightly insane.

I really liked this month’s topic, and I’m looking forward to everyone else’s posts, because retellings are cool! Ella Enchanted by Gail Carson Levine is one of the best examples I can think of. I love that book; I have read it so many times. I think the best retellings are the ones where you forget that they are retellings. They become their own stories. Some other retellings I enjoyed are the Percy Jackson and the Olympians series (Greek mythology) by Rick Riordan and Spindle’s End (Sleeping Beauty/Briar Rose) by Robin McKinley. After “The Prince’s Tale”, I think J.K. Rowling’s greatest writing achievement is “The Tale of the Three Brothers” because it really does feel like this is a story that Wizarding parents have been telling their children for generations. This topic also came at a good time for me, because in one of my online English classes, we just read Grimm’s Fairy Tales and many of them are still fresh in my mind.

August 11 – http://www.astoryofadreamer.blogspot.com/ – A Story of a Dreamer

August 12 – http://weirdalocity.wordpress.com/ – Life, Among Other Things

August 15 –http://scribblingbeyondthemargins.wordpress.com– Scribbling Beyond the Margins

August 20– http://allegradavis.wordpress.com – All I Need Is A Keyboard

August 22 – http://teenscanwritetoo.wordpress.com– Teens Can Write, Too! (We will be announcing the topic for next month’s chain.)

18 Responses to Read All About It – Local Girl Marries A Prince: Teens Can Write, Too! August 2012 Blog Chain