I Have Fallen Asleep In The City That Never Sleeps

You’ve probably noticed that my Camp NaNoWriMo progress bar hasn’t been progressing lately. I also haven’t been posting as frequently, although it’s back to normal now. What was going on, you ask? Where was nevillegirl? Only in an amazing place – New York City!

It took a long time to drive there. We split the traveling into two days at both the beginning and the end, in fact. But I wasn’t bored, because I’d brought some books. What I did not bring was a notebook. I told myself that of course I wouldn’t need one! But I got some more ideas for another story and I wanted to jot down notes about characters. Because I couldn’t, I just planned stuff in my head. I can spend hours thinking about ideas for stories, which is why I was sitting in the car and staring out the window at Pennsylvania for so long. I was off in my own world. I spent any remaining time either wondering why Pennsylvania had to be so big or thinking about some books. 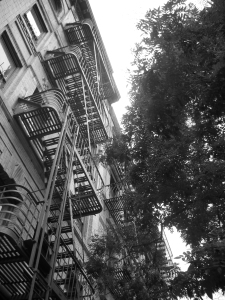 You see, many of my absolute favorite books take place at least partially in New York City. Harry Potter doesn’t, of course, but four other series that I love do. So you’re spared from the Potter babbling. For today. I was really looking forward to seeing some of the places mentioned in those books.

We finally crossed into New Jersey, a state that my dad refers to as the “armpit of America.” I hope none of my readers come from there because firstly, I don’t want them mad at me and secondly, I feel sorry for them. I was so excited – we were almost there! I was happy to see the skyscrapers of Manhattan poking through the fog. After traveling through the Lincoln Tunnel and arriving at our hotel, we went for a walk. We visited Grand Central Station first, since it was right next door to our hotel. It was cool to watch; all the people running around reminded me of ants on an anthill.

After that, we wandered through Times Square. There were tons of people there, including some people dressed up as Elmo and other characters. We saw the ‘Naked Cowboy’, unfortunately. Thankfully he isn’t quite naked. And let’s just say that seeing the ‘Naked Cowgirl’ nearly made me lose my lunch. We walked to Greenwich Village, or possibly we took a cab there. I can’t remember. More on those cabs later. Anyway, we had dinner at Joe’s Pizza. We folded our slices in half, New York City-style, because they were so big. Yummy! I liked Greenwich Village because the buildings were shorter and there weren’t as many people. I was already loving NYC, but I liked that this particular part of it wasn’t quite as crazy as the area closer to the hotel. 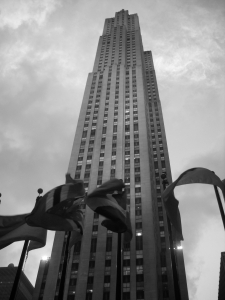 That night we went to the Top of the Rock, or the 67th, 69th, and 70th floors of the Rockefeller Center. I absolutely hated it. I’m terrified of heights and being up there in the dark was awful. I know that I’m not going to fall from the building, but I still don’t like heights. I was glad to get down from there. I had tried to enjoy it, but it just made me really, really nervous. 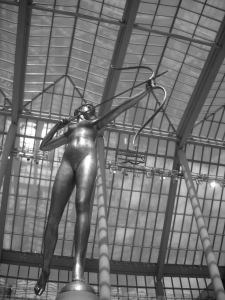 The next morning found my family at the Metropolitan Museum of Art. My favorite parts included the sculptures in an indoor courtyard and the 19th-century paintings gallery. My mom just rolled her eyes when I commented that some of the statues looked like the members of the band Queen and when I said, “Jesus! Look at that!” when passing a statue of Christ.

I enjoyed the Museum very much.

We stepped out into the fresh air and walked into Central Park, where I alternated looking up at the trees and looking down at the ground to find the concrete slab that covers an entrance to the Underland from the Underland Chronicles by Suzanne Collins. I didn’t see it, though. I suppose they’re all over the park, but they weren’t where we were, or else I missed all of them in the area.

We had hot dogs for lunch at Gray’s Papaya then resumed walking. We passed the Dakota building which turned out to be far bigger and more ornate than I had imagined it. There were a lot of vendors selling Beatles/Lennon stuff near Strawberry Fields, but we ignored that and walked to the ‘Imagine’ mosaic. We didn’t stay there very long, though, because it had been raining off and on since leaving the Metropolitan and we didn’t want to get soaked. We had already been ducking under the awnings of buildings and waiting out sudden downpours. 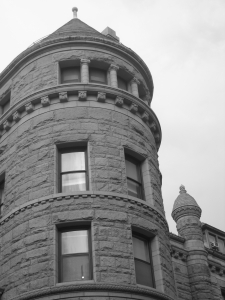 I wanted to see the American Museum of Natural History and I’ll admit that was partially because of the movie Night At The Museum. It was OK. We didn’t see all of it or even half of it. There were some exhibits that just didn’t interest us. I guess we’re a bit spoiled by already living fairly close to another city, Chicago. I’ve been to the Museum of Science and Industry and the Field Museum many times, so there was a lot of overlap from museum to museum. My favorite exhibit was about ocean animals. Boots loves to run under the life-size model of a blue whale there in the Underland Chronicles, unless I’m mistaken and I’m thinking of some other book. I had also read about the whale in some other book and I wanted to see just how big one really is! I had thought it was about half as big. My biggest complaint about the Museum was that it was so dark. I suppose that the lights were dim to preserve the specimens, but it made it very difficult to read the exhibit labels and even to look at some of the smaller specimens. I looked at quite a few of the animals in the ocean exhibit, but I can’t recall reading a thing there because it was so hard to see. 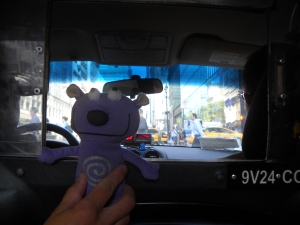 Oh, yeah. The taxis. I haven’t forgotten about them! I loved riding in them because it was so crazy. My mom hated it, but I thought it was like a rollercoaster ride. I was always glad when some place was too far to walk to.

It was still raining fitfully when we left the Museum and walked to the Cathedral Church of St. John the Divine, as it is officially known. Isn’t ‘Cathedral Church’ sort of redundant? Oh well. It was amazing. The outside was ornately carved with all sorts of beautiful designs and had many gargoyles along the eaves. The building is not nearly as ornate on the inside, but it makes up for that by being so huge! If you’ve ever seen a sequoia tree in real life (or the cross-section on display at the American Museum of Natural History), then imagine stone columns the height and diameter of those trees down both sides of the building. Depending on your level of cynicism, you might have something of a religious experience due to your awe at such a huge and pretty building, or you might think of religious oppression. “Wow, such a huge building – what a great way for the church to show who’s in control!” I thought that this was the church the kids visited in Maximum Ride, but I just checked The Angel Experiment and it was St. Patrick’s Cathedral. Just another example of James Patterson not knowing what he’s doing. If he had any sense he’d have had them visiting St. John the Divine.

On all our walks, I looked at many of the manhole covers in NYC, half hoping that some other bookish nerd would have drawn the gold insignia of a girl running from the Kiki Strike series. No such luck. But I still imagined those teenage girl spies running around through the tunnels below NYC. 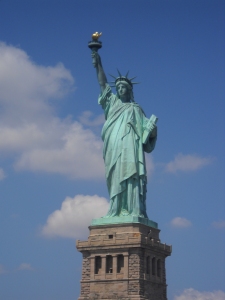 My family went on a 2-hour boat tour of New York City Harbor the next morning. We passed under many of the bridges and my favorite was the Brooklyn Bridge. We saw One World Trade Center under construction, already taller than any other building there. The Statue of Liberty was smaller than I expected, but still pretty cool. The day was bright and sunny and very enjoyable. I was pleasantly surprised by that, because our previous days had been cloudy and rainy.

That afternoon we went to the 86th floor of the Empire State Building. After waiting forever in lines that reminded me of those in a cattle slaughtering yard, we took the elevator and stepped out onto the outdoor observation deck. I was, surprisingly, fine. I did hold hands with my mom, though, because it made me less scared. At first I was scared, but then I began to enjoy the view and even got a few nice photos of the Chrysler building. Back down on a lower floor, I walked up to a man at the front desk and cheerfully said, “May I go to the 600th floor, please? My friend Percy told me about it.” He said, “Sadly, it doesn’t exist. Is that movie reference?” Excuse me?! A movie reference? The Lightning Thief was an excellent book long before it was a terrible movie! Speaking of Percy Jackson, once we got home I picked up my copy and realized his address is East 104th and 1st. I still have to figure out if that’s a real place, though. We had dinner that night at an Italian restaurant called Piccolo-Angelo, where I had tortellini alfredo, or pasta stuffed with cheese covered in a cheese sauce! Delicious! 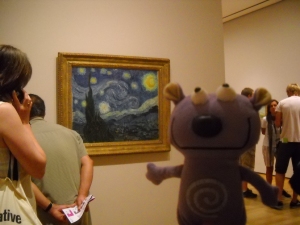 On our last day in NYC we went to MoMA, or the Museum of Modern Art. Some of my favorite pieces of art there include van Gogh’s Starry Night, the Roy Lichtenstein stuff, Dali’s The Persistance of Memory, and Monet’s paintings. I hadn’t realized that Monet’s works were so big; they were wall-sized. I think his art is really pretty and it shows the world as it appears to me when I take my glasses off: extremely blurry. I also hadn’t realized that Dali’s painting was so small, smaller than the average picture book. Afterwards, we drove home.

I really loved NYC. I am usually not a big fan of cities, because there are too many people and not enough nature for my tastes. But I enjoyed visiting New York City because of all the cool stuff. (I also enjoyed my week-long break from Camp NaNoWriMo.) It definitely goes in my Top Five list of favorite cities, below San Francisco and Washington D.C. and above two other cities that I can’t remember at the moment. So as you can see, New York City is a pretty awesome place.