One of our final assignments for Physics this year was about creativity, rather than calculations. Yay! I had to find at least eight pictures illustrating physics concepts, then state what the concept was and how it was illustrated. Whenever possible, I adapt my assignments so I can read/write/talk about something cool, so I asked if it would be alright to use pictures with fictional characters.

Physics concept: Newton’s Third Law of Motion (“Whenever one object exerts a force on a second object, the second exerts an equal and opposite force on the first.”)

How it is illustrated: I blame physics for ruining my enjoyment of A Game of Thrones. Viserys is being a git so Drogo takes off his gold belt and tosses it into a stew pot hanging over the fire. After not very long at all, the gold has melted and Viserys gets “a golden crown that men shall tremble to behold” just as promised. Trouble is, the heat of fusion for gold is 63 kilojoules per kilogram which means its change of phase (or melting point) is 1064°C.

If I remember correctly, Vaes Dothrak is a warm place so let’s assume a starting temperature of 25°C (around 80°F). The gold is heated at a steady rate until it reaches 1064°C, at which point the temperature stops increasing although heat is still being added. The gold gradually changes from solid to liquid with no change in temperature until 1515 kJ of heat later when all of it has melted and reached the heat of vaporization (where it will turn into steam).

As awesome/terrifying/sad as this scene might be, it couldn’t have happened. Who keeps their fires at 1064°C just for stew? Drogo may be a mighty warrior, but a scientist he is not.

How it is illustrated: Lurtz’s arrows remained at rest until released, or acted upon by a force. They flew through the air, remaining in motion and at constant velocity until acted upon by the force of Boromir’s body stopping them. 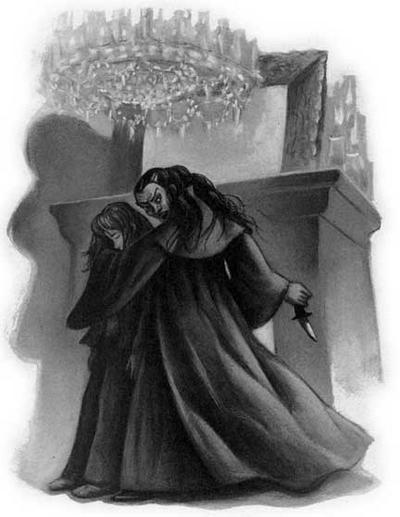 How it is illustrated: Neglecting friction such as air resistance, all objects (like a chandelier) fall with a uniform rate of acceleration relative to the center of mass. The standard value is 9.8 meters per second squared.

How it is illustrated: Convection involves the moment of molecules over large distances. It is the process by which heat is transferred by the mass movement of moles from one place to another. The air above the fire expands as it is heated, causing its density to decrease – so it rises and circulates throughout the room, warming Calvin and Hobbes.

How it is illustrated: A wedge is a triangular-shaped tool, one of the simple machines. Mechanical advantage is defined as the length of its slope divided by its width. The more acute (or narrow) the angle of a sword like Thorin’s Orcrist, the greater the ratio of the length of its slope to its width and therefore the more mechanical advantage it will yield.

How it is illustrated: When a body such as a sledge is in motion along a rough surface such as snow the force of kinetic friction acts opposite to the direction of the body’s motion, slowing down the body.

How it is illustrated: Clearly, the button-covered panel on the front of Darth Vader’s suit is wired in series. (Just bear with me here, OK?) Let’s say that each blue button has a resistor, for a total of three resistors. Vader wants to replace them with one large resistor. The formula for equivalent resistors in series is RT = R1 + R2 + R3. The resistors have resistances of 4 Ω, 10 Ω, and 22.5 Ω, respectively; so to calculate we simply add them up.

Darth Vader needs to ask his master Darth Sidious for a resistor of resistance 36.5!

Yippee, today’s the last day of school! Though I have to say I’m rather disappointed – I thought that by now I’d have gotten a late-notice acceptance letter to Hogwarts telling me I can study for my N.E.W.T.s there. Well, I guess one can’t have everything.

16 Responses to The Physics Of Phiction