A Celebration Of Adaptations – Teens Can Write, Too! June 2014 Blog Chain

This month’s prompt is:

What are your thoughts on book-to-movie adaptions? Would you one day want your book made into a movie, or probably not?

Excellent questions. The thing is, all books are different. My opinion on book-to-film adaptations isn’t set in stone, because I think some adaptations are more likely to succeed than others. For a variety of reasons.

For example, some stories are just more cinematic than others in their genre. Maximum Ride: The Angel Experiment by James Patterson would make a superb movie, what with all those action scenes and cliffhangers. A good example of an action-packed adaptation which has already been made is The Hunger Games or Catching Fire.

Heart of Darkness, on the other hand, would probably not make such a good movie. It’s a truly stunning book but focuses very very heavily on ideas, not action. It’s a very philosophical book – and I bet it’s difficult to translate that into a film, because long scenes filled with deep thoughts don’t hold an audience’s attention as long as action sequences do.

A second factor in determining an adaptation’s potential for success is its faithfulness to the original book. Obviously, fans of the original story don’t want to be disappointed, but I also think keeping an adaptation as similar to the source material as possible also helps the movie to make more sense for those who haven’t read the book.

I mean, authors know what they’re doing. They’re trying to tell a coherent story, one that flows and makes sense. When film adaptations rearrange the order of events or delete some scenes entirely, that can affect those movies negatively. Consider Harry Potter and the Order of the Phoenix – lots of things were cut, such as the scene in which Sirius gives Harry the two-way mirror.

No big deal, right? Well, in the final two movies, the mirror turns up with no explanation and is actually very important to the plot! I’m not asking for every last little detail to be exactly as described in the book but whenever I hear that authors are directing/advising an adaptation of one of their books, I feel better because I know they won’t cut crucial scenes left and right.

The third and final factor is length – the reason I really can’t blame whoever made Order of the Phoenix for cutting that scene. It messed up later movies, but hey. It can’t be easy to make movies out of such long books. It’s impossible to cram in all the scenes, or even most of them, or even all of the absolutely necessary scenes.

Some book-to-film adaptations suffer simply because the plot is too long and too big to fit comfortably into one movie. So we’re left with something incomplete.

…or the adaptation is split into multiple parts. First Harry Potter and the Deathly Hallows, then Breaking Dawn, The Hobbit, Mockingjay, Allegiant, and who knows how many more. Sometimes this works. Sometimes it doesn’t. In my opinion, the final two Harry Potter films were much more accurate to the original story than their predecessors were because more time was allowed for the plot to develop.

The Hobbit, though… meh. I love the book, and the first two movies certainly have their share of great moments, but there have also been far too many scenes that made me go JUST HURRY UP, ALREADY. I WANT TO SEE THE BATTLE OF THE FIVE ARMIES!

Long and/or complicated stories have another, better option, though – and I think sometimes we forget about it. TV shows! Adapting a book for TV allows much more time to explain the plot. For example, Sir Arthur Conan Doyle’s works have been successfully adapted into Sherlock and Elementary (as in “Elementary, my dear Watson!”). 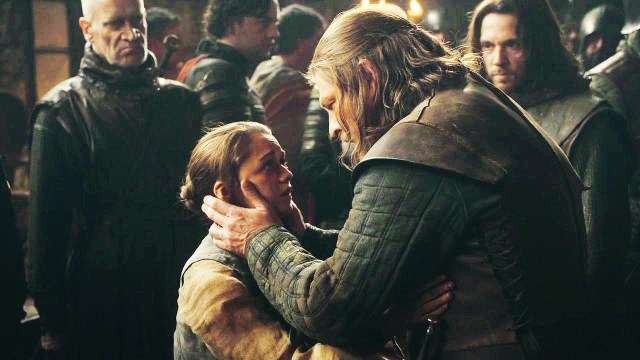 “Don’t worry, dear. This will be a GOOD adaptation! Even if I die in it. Plus, TV shows are free. Unlike movies…”

My favorite example is Game of Thrones, adapted from George R.R. Martin’s A Song of Ice and Fire series. Those books are ultra-long and probably would’ve failed miserably if made into movies. I’m only half-joking when I say that the best way to make a decent movie out of those books would be to have a single character (say, Ned Stark) speed-reading aloud a list of the story’s main events.

When adapted into seasons of ten episodes each an hour in length, however, the story works superbly. Consider book three, A Storm of Swords. It was too long to be adapted into even one season, so they made it two, and the pacing has been phenomenally good. The final episode of season four airs tonight, meaning you can now watch the third book for twenty hours in a row if that’s what you like.

And that’s all I have to say about adaptation of other people’s books, so I’ll now move on to the final question. Would I one day want my book(s) made into a movie?

I DON’T KNOW. It depends. On a lot of things.

On one hand, I’d love to see one of my stories reimagined onscreen. And it would be super cool to know that something I wrote was popular enough to make people want an adaptation. And because most of my stories have queer protagonists, there would be more LGBTQ+ representation in the media. Anyone has read my blog for a while knows how important that is to me.

But on the other hand, I think I’d worry about potential failures. Not commercial failures – failures as in, “This is NOTHING like my book!” I feel protective of my stories, OK? I would want as little as possible changed. And I’d probably be upset at first when casting time came because I often have very specific mental images of what characters look like.

However, if I thought someone would make a truly terrible adaptation from my stories then I just wouldn’t let them in the first place. Authors have to sign off on that stuff, right?

Or I could be involved in the filmmaking process. I could advise the producer, or co-screenwrite, or play a small role. Actually, I think I’d like that third option. I’ve always wanted to try acting.

So, there you have it. I have a lot of thoughts about book-to-film adaptations, possibly because I’m looking forward to so many of them: The Giver, The Maze Runner, Mockingjay Part One, and The Hobbit: The Battle of the Five Armies. What are your thoughts about this topic?

P.S. If you want to read more of my ramblings, one of my earlier posts is about movies and the quest for originality.

20 Responses to A Celebration Of Adaptations – Teens Can Write, Too! June 2014 Blog Chain