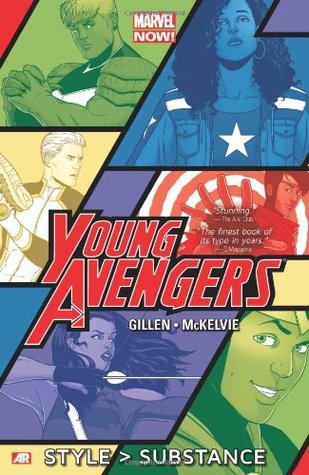 I love superheroes. And I love comics. And I really, really, REALLY love the Young Avengers comics written by Kieron Gillen and drawn by Jamie McKelvie. My favorite solo superhero is (and probably always will be) Captain America, but my fave buttkicking team? Definitely the Young Avengers.

I read these comics last winter and they blew my mind. SOME INTENSE FANGIRLING OCCURRED. After reading them, I wanted to A) convert all my friends into faithful Young Avengers fans and B) buy all three volumes of the story.

Well, with the publication of this post, I can cross one of those items off my list. I’ll have to wait just a wee bit longer to buy the comics, though. For such short books, they sure do cost a lot of money – $12.95 for each one-hundred-ish-pages-long volume! Happily, the comic book store is celebrating their twenty-fifth anniversary this weekend with a sale. OOH 30% OFF I CAN’T WAIT.

Anyway. I got a little carried away there, didn’t I? Sorry about that… but comics are
awesome, and I need more. And so do you! You need the Young Avengers books in your life ASAP and I’m here to tell you why.

All right, first of all… Kieron Gillen just UNDERSTANDS teenagers so well. Young Avengers is about a group of teens who kick butt, fight evil, and frequently update their social media accounts with photos and stories of their latest adventures. #superheroesloveinstagram

And all the kids just feel so… real. They’re sarcastic, and rebellious, and foolish, and daring, and scared. They’re just KIDS! They’re still trying to figure out life and everything in it, and they have the added pressure of trying to save the world.

I love how Gillen handles this – his approach is a little serious, a little lighthearted. This teenagers are fighting evil, but Young Avengers NEVER reaches the Pit Of Doom And Angst that you’d find when reading, say, Batman. I love this. Like, sometimes I enjoy reading Batman and wallowing in all that misery, but sometimes I want something a little… different? Something that’s funny without being ridiculous?

And Young Avengers fits the bill… especially with its sass. OH THE SASS. Not a page goes by without SOMEONE making some kind of snarky, hilarious comment. THESE KIDS HAVE ATTITUDE. I love that, too. It keeps the story zipping along from one chaotic scene to the next.

Kieron Gillen’s characters lie at the heart of this story, I think. Don’t get me wrong, I enjoyed the plot, but I also don’t think it’s the focus of this story? As I said before, all the characters feel so real, and each Young Avenger has a distinct, unique personality.

Here, let me introduce them to you, in order from least to most favorite. (Hey, I can’t help it – they’re all great, but some were merely “great” and some were “ALSDKFJDSJLASD GREAT.” I am sure you can understand that feeling.)

+ Billy Kaplan AKA Wiccan: He’s the son of Vision and the Scarlet Witch, who are also in these comics! Billy may not be my favoritest, but his existence makes me very hopeful for a possible Young Avengers movie spin-off, since both of his parents were in the recent film Avengers: Age of Ultron. There is a PERFECT opportunity to introduce him and, by extension, the rest of the Young Avengers!

+ Teddy Altman AKA Hulkling: He is literally the sweetest? And OMG A TEENY-TINY HULKING AWWW.

+ Noh-Varr AKA Marvel Boy: He’s an alien! And part cockroach, apparently – I don’t even know. Don’t question the logic of comics, all right?!

+ Kate Bishop AKA Hawkeye: The adult Hawkeye – AKA Clint Barton – is her mentor! She is adorable and very talented with a bow and arrow.

+ David Alleyne AKA Prodigy: HE IS THE SWEETEST. And the brilliantest. (That’s totally a word.) And he made me cry. Oh, and he’s also one of the X-Men! SO MANY CROSSOVER CHARACTERS IN THESE COMICS OH MY.

+ America Chavez AKA Miss America: MY DARLING. MY PRECIOUS. THE LOVE OF MY LIFE. ET CETERA. I’m pretty sure a full half of the sassy comments are made by America? She’s wonderful and I love her so much. She likes punching people. Her hair-and-outfits game is ON POINT. One time she kicked through a window and it was awesome.

There’s also Kid Loki, who is kind of a member of the Young Avengers, but also kind of an antagonist. I don’t know. It’s complicated. He is basically just as complicated and morally-gray as the adult version of Loki from other comics (as well as the MCU).

(And if you’re like me, and originally balk at reading these comics because, “I’m not reading anything with a character named Kid Loki in it. That’s just RIDICULOUS and I REFUSE,” you should… trust me. Just trust me, OK? His name is ridiculous but the character is definitely NOT.)

All of these characters are awesome. Oh, and did I mention that they’re all diverse? EVERY SINGLE ONE OF THEM? To begin with, there are a few racially diverse superheroes – Prodigy is black, and America is Latina.

And even better, EVERY SINGLE YOUNG AVENGER IS QUEER. The level of visibility or “outness” varies from character to character: It is merely implied that Kate and Noh-Varr are queer, while Loki is happy to make out with anyone but doesn’t try to do so until towards the end of volume three. Wiccan and Hulking, on the other hand, spend pages upon pages making out, and America is the lesbianest lesbian ever to lesbian.

And then there’s Prodigy.

OK, so before I go any further, I should probably point out that I don’t normally get all that attached to queer male characters? I mean, I like them and everything, but I just… become way way more emotionally invested in the queer ladies’ stories? Probably because I can relate to them better?

So I was kind of surprised to find that I liked Prodigy’s queer subplot more than America’s! As I said before, he made me cry… when he came out. OH MY GOD PRODIGY YOU ARE… YOU ARE THE BEST.

“It was like an awakening. It was like realizing something that was always true and I just couldn’t see it until now. It was like all the rooms in my head opening.”

I just… I can actually relate to that? For once? I KNOW THAT FEELING. AND HE DESCRIBED IT SO WELL AAAAH OMG. And – although I can’t relate to this bit, because I am HELLA GAY – it’s soooo important to have bi characters in fiction. We need more of them! And we need more who proudly label themselves as such, and don’t avoid the issue.

Please excuse me while I go cry about tiny queer superheroes.

I love the Young Avengers series, and I think you would as well. These comics are fun, colorful, action-packed, well-thought-out, crammed with great characters, and absolutely overflowing with diversity and awesomeness and sass.

In order, the books are: