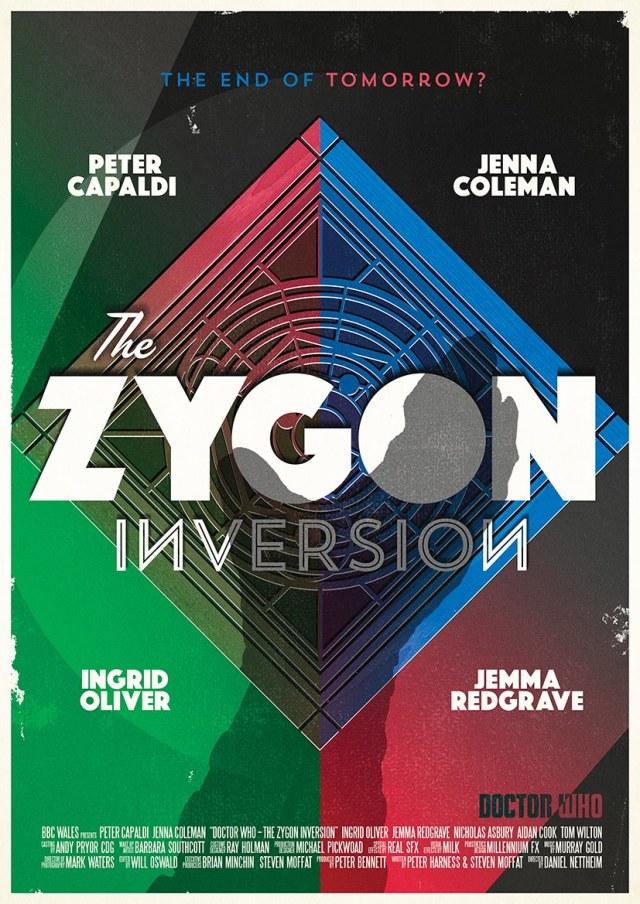 Hello! I’ve fallen behind on my series nine reviews once again, but I’m trying to catch up… and now that the semester is almost over but we haven’t reached finals, my workload has significantly decreased. So I have more free time!

Micha is a first year student at New York University studying biology and chemistry, although they have an affinity for all things scientific – and science fictional. They have been known to get very enthusiastic about the intersection of the two, which may be one reason family and friends sometimes describe them as “an aspiring mad scientist.” And while loving features of all eras of show, they often find themself in the position of having to explain why Paul McGann is their favorite Doctor – a response that, given his hour and a half of televised screentime, sometimes elicits very honest inquiries of “Doctor WHO?” They blog at Curiousology.

Engie: So, “The Zygon Invasion” and “The Zygon Inversion” basically tied up all the loose ends left over from “The Day of the Doctor.” What are your thoughts on this episode as it relates to the plot of the fiftieth anniversary special?

Micha: Well, on one hand, there’s a touch of disappointment in the idea that the peace they negotiated in the fiftieth hasn’t lasted. But at the same time, I think that’s a much more honest commentary on the nature of real wars, and real peace treaties – that a badly- or even well-negotiated solution might not last, that they cause new and unforeseen problems, and that they’re never going to be airtight.

Micha: So on the whole, I think it managed to uphold the general theme – that a peace between two disagreeing factions is something to be continually working for, and that making people see things from another perspective has a powerful impact – while weaving in further commentary on the issue. Commentary that I’d say is very, very relevant.

Engie: …you just said what I was going to say, and said it better than I could. NICE.

Micha: Osgood was wonderful – I’d mentioned that earlier, after the first episode, hoping to see her in a bigger role, and seeing that actually happen was exciting. Not to mention well done. And not just in a meaningful way, though I do love her character growth – it was also just great to see her working with the Doctor. The two of them in the van together, arguing with each other, is definitely one of my favorite things to come out of this series.

Engie: They made a great team! They were a ton of fun to watch.

Micha: I guess what I love about how they’re writing Osgood is that they’ve hit this wonderful balance in what she brings to an episode – of being both fun and having depth. It was present even when she first showed up in the fiftieth, to some degree, but it’s grown to a much more noticeable level with her character. I love everything she represents in the narrative now – the concepts of preserving peace, and overcoming differences, and that they’re to be admired.

Micha: But I also love that she nerds out a bit criticizing the Doctor’s sunglasses and has an apparently still-growing closet of his outfits. I love her combination of quirks and character that let her serve as both something of a symbol, and yet still a real person in the story. And it’s been so great to watch her grow into that, even if the consolatory blanket fort I built myself when I thought she was killed off for good after “Death in Heaven” can attest to it having some ups and downs.

Engie: I love what they’ve done with her character! In “The Day of the Doctor,” she was basically a self-insert character for the viewers, and now she’s something more. Not that being a fangirl is a bad thing, but… we’re learning about all the other aspects of her life and personality now as well, and that’s great. Osgood is much more complex now than she originally was, and I love it.

Micha: I’M SO GLAD YOU MENTIONED THEIR ACTING. Especially Jenna’s, because while I really like Clara, I think this episode was the one that really made me realize how much depth she has as an actress, beyond just as one character I’ve grown to love. The differences in mannerisms between her characters, the emotion that she, in particular, put into more of Bonnie’s scenes at the end – it just really hit me how much I hope to see her in things even after she’s gone from Doctor Who. (Which is unfortunately a time rapidly approaching.) She’s really very talented.

Engie: She is! (She was fantastic as Bonnie and as Bonnie-pretending-to-be-Clara.) I’ve said this probably a thousand times already, but I think Coleman is a GREAT actress and I’m really happy that she’s moving on to other projects – she was cast as the lead role of Queen Victoria for some new period drama show – because she deserves bigger and better roles. I think she’s made the most of what she has by giving it her all on Doctor Who. I mean, the writers gave her some pretty crappy episodes and characterization to work with, especially in series seven. I’m glad that she’s had a chance to really shine in this series!

Micha: And Peter, of course – he’s already had some wonderful, defining character speeches on the how, but this one was beautiful. And delivered in the same episode that he proclaimed himself Dr. Basil Disco no less.Twelve in a nutshell for you – character depth and awkward space dad all rolled into one. (I also really loved that even his scenes with Osgood gave off some of that same vibe he has with Clara. The bit in the van in particular looked a bit like a scene from a begrudging family road trip. It gives me hope that whoever his next companion is, there will still be a really enjoyable dynamic.)

Engie: AHHHH I LOVED HIS SPEECH. I think he’s done a great job portraying the Doctor in general, but every so often there’s an episode that just makes me go WHOA I’M SO GLAD THIS GUY IS PLAYING THE DOCTOR. And this was one of those moments.

Micha: Needless to say, both actors did fantastically well. And as for their characters – I hate that even in an episode where they don’t share many scenes together, being separated by plot, their relationship can be as powerful as it is. They’re really hitting home the “Clara’s leaving” theme this season, and while I don’t think it’s too hard narratively, I think it’s a bit too hard on my heart.

Micha: I’ve talked before how I think their relationship is something really unique and important to see on TV – that they do a lot of things for each other you don’t always see in explicitly platonic relationships. The show consistently makes a point of showing how much they mean to each other, in a way that technically is, but isn’t being “just friends” – I mean, they are, but sometimes in fiction especially people act like that’s not enough.

Micha: Even Doctor Who specifically has been guilty of pulling those plots in the new series. It’s wonderful to see that get turned on it’s head, and while I hope the next companion carries on the tradition, the Doctor & Clara dynamic has been wonderful to watch happen these past few seasons, and it continues to be even as we approach the – definitely going to be painful – end.

Engie: What is your overall opinion of this episode?

Micha: I’ll be honest, after the first episode, I wasn’t completely sure how I felt about the whole thing? I mean, it wasn’t bad. It just struck me as a rather average episode, in a season that’s been pretty great, and with characters that I was so excited to see again that I wanted more from.

Micha: But this one really tied it all together. I loved the story it ultimately told – about peace, and what it is, and what it requires – and that I thought it did so well. I loved seeing the characters I like so much actually get that chance to shine. (Osgood, and Kate had her moments too – the classic “Five rounds rapid!” reference, one of her dad’s most iconic lines, had me grinning from ear to ear.) I loved seeing Peter and Jenna both give stellar emotional performances… it all really came together nicely, and combined a lot of elements it was wonderful to see in one arc. Definitely worth the wait, I’d say.

Engie: I’m in the same boat as you – “The Zygon Invasion” was fun, but didn’t strike me as anything special. Capaldi’s and Coleman’s performances in this episode, however, really brought this two-parter up a notch for me. This could’ve very well been a set of forgettable, average episodes, but I thought the second part successfully avoided that… which is a slightly odd thing for me to say, because normally I love the first part of a two-part episode and judge the second part sooooo hard that I end up disliking it? Hmmm. At any rate, that wasn’t the case this time around.

Engie: Thank you for reviewing this episode with me!

What is YOUR opinion on “The Zygon Inversion”? I’d love to know!