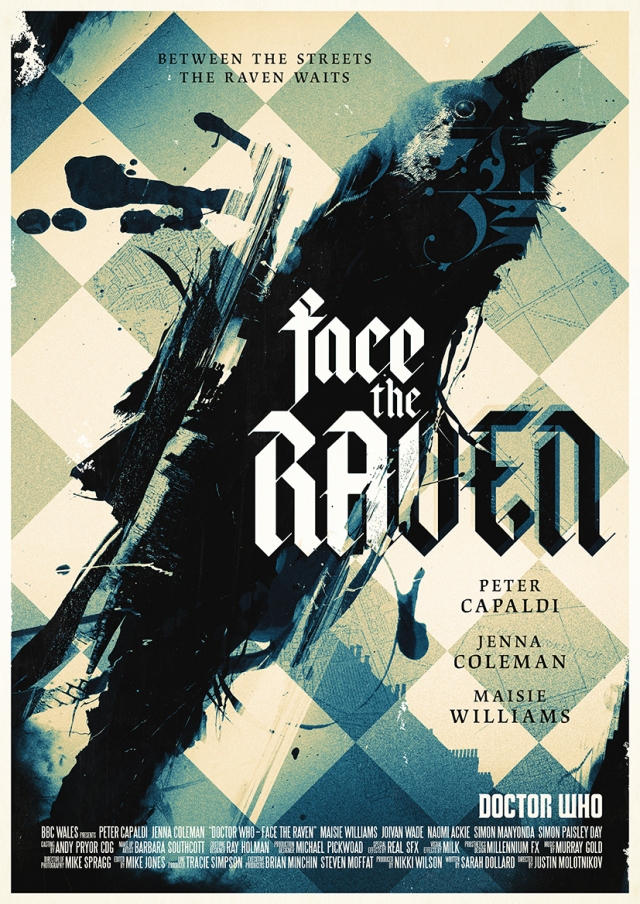 Hello! Today I’m reviewing “Face the Raven” with my friend Alex! I’m trying to catch up on these reviews so that the one for the finale can be posted shortly after it airs.

Oh, and there’s one other thing I want to say before I forget! I’ll probably say this again in the next review, actually, for the people who forgot: Originally I thought this was a standalone episode, followed by a two-part finale.

However… for the first time since series three, we have a three-part episode! I prefer to review all parts of any particular episode with the same blogger BECAUSE CONTINUITY AND STUFF, sooooo… yeah. Orphu @ A Mirror Made of Words signed up to review the finale, but she very graciously agreed to let Alex review episodes eleven and twelve. So if you’re, I don’t know, checking the review schedule that I posted a few months ago, I’ve made some changes to it, OK?

Alexandrina Brant is a third-year psychology and philosophy student at Reading University, England, which means she alternates between planning experiments and critiquing history. When not polishing her fantasy romance novel about time travel, she’s cosplaying steampunk, singing, and playing Quidditch for the university team. She has authority in writing this review because she’s River Song’s doppelganger, hair and all. You can catch her blogging at Miss Alexandrina. She tweets prolifically @Caelestia_Flora. Yes, her Twitter username is Latin.

Alex: The beginning shows that Clara is getting too overconfident and rash in her choices travelling with the Doctor, as she’s been doing all this season. I often wonder what they get up to in their off-screen adventures, but that’s for the fanfiction-ists to write. Same comment with when the TARDIS is flying over London. I’m guessing the TARDIS’ perception-filter stops people from noticing a giant blue box floating above London. More logical than Harry Potter, then. However, she does show companion status by taking Riggsy’s Chronolock – bravery, care for the human family. So, she’s rash and generous…

Engie: I love what they’ve done with her character. I feel like the writers didn’t really know what they were trying to do for much of the time Clara has been on the show, but they had a better idea of it in series nine. I guess her overall character arc would be that of saving the Doctor, then trying to become the Doctor? I noticed throughout this series – and a little bit in series eight – that she was becoming more and more like the Doctor. Maybe that’s why some fans complained about how the show was now more like “Clara Who”?

Alex: Her speech at the end… I could skip it, but I guess, if this is truly the end for Clara (and the echoes), her monologue – the parallel to her “run, you clever boy, and remember me” – gives her a grand exit. “Maybe this is what I want.” Maybe. I felt for Clara when her boyfriend died – maybe all she’s ever wanted is to join him. That’s only fair, right? I like to think she’s at peace at last, and her echoes are no longer obliged to help the Doctor.

Alex: On the other hand… I don’t like how Clara’s death makes the Doctor angry. The thing is… that’s been done before. With every companion. It’s kind of… boring. Yes, it’s nice to see him have these memorable relationships and lose friends just like humans do, but… why always the anger or the desperate acts? Even Ten only acted this way when he thought he was going to die.

Engie: I agree. I do like how she told him not to be angry, though – or rather, that he can be both sad and mad, but that he shouldn’t take that out on anyone else because this was her choice. We’ll have to see if he actually listened to her, though.

Engie: Now that Clara’s story is over, how satisfied are you with her characterization? Do you think she could have been written better?

Alex: I definitely think Clara could have been written better, though she works as a better companion to Twelve than she did to Eleven. She’s like a sensible niece to her grumpy uncle! It’s difficult to know if she was used just right or not, since I didn’t like her from how she was written at the beginning – and first impressions are hard to break.

Engie: I know that I definitely need to spend more time thinking about how her character functioned, because I’m still not sure how I feel about it. I definitely agree that she was amazing with Twelve! I disliked her with Eleven… but then, I didn’t like any of the companions from his era.

Engie: You know, it’s weird – I started watching this show in the summer of 2013. Series seven had just concluded, so I watched series one through seven and then the first episode that aired after I became a fan was the fiftieth anniversary special. So… Clara has been the companion for as long as I’ve been watching the show – longer than that, even. I didn’t even like her much at first, but it’s just a bit weird because I’m SO used to her presence. And I’m also excited for all the fan speculation about the new companion!

Engie: I can’t believe she keeps renaming herself after herself. WHAT A DORK.

Alex: I love that character. She’s cruel to the Doctor, but she has every right to be. He gave the greatest give of eternal life – the greatest curse of living forever. Why was the Doctor tracking Ashildir/Me? Because he’s threatened by her? He thinks she will be dangerous? Perhaps he is right, but then she is also strong and has had to grow a hard heart, as shown in “The Woman Who Lived.”

Alex: I believe she is trying to help the aliens – and that is for the good. She’s only trying to help. She has a soft spot for Clara, certainly, and that makes me wonder. Her face and the pain when she sees Clara with the Chronolock… Beautiful acting.

Engie: YESSSSS I LOVE HER ACTING SO MUCH. I’m happy that Maisie Williams had a recurring role in this series, because I thought she was going to play a one-off character!

Engie: At the end of this episode it’s heavily implied – or at least, I thought it was? – that Me is sending Twelve to the Master. This doesn’t surprise me at all! I didn’t PREDICT that she would, but… towards the end of “The Woman Who Lived,” the Doctor and Me are set up as something like adversaries, but not quite. She doesn’t hate the Doctor, but I got the feeling that if presented with a good offer, she would work more directly against him.

Engie: Like I said, I didn’t think that there WOULD be a connection to Missy, but that there COULD be. Me is morally ambiguous, so it doesn’t surprise me that she was on Missy’s side all along in this episode. I think they’d get along quite well.

Alex: The science fiction elements of the episode were creative. The hidden/trap streets! It has an element of steampunk glamour about it.

Engie: I loooooved the concept of this episode. LOVED it. It was so magical and beautiful… I kind of want to visit that street now. I mean, as long as I could avoid FACING THE RAVEN.

Alex: I like the fact they were taking in refugees – this was probably mentioned in the Zygon episodes reviews, but it’s very culturally relevant at the moment, and that is bound to strike a cord with viewers.

Engie: Yes! That didn’t make it into the final version of our reviews of those episodes, but we did discuss it briefly while we were drafting the post. “Face the Raven” and the two Zygon episodes were definitely culturally relevant. I feel like it’s too much of a coincidence to have multiple episodes about refugees this series, so I’m guessing the writers knew what they were doing?

Alex: I also love the misdirection circuit and the light fields. Obviously, great for production, but also a fascinating idea. They look like humans in a human world.

Engie: YES! That part was amazing.

Alex: I only wish they’d shown us better what happened to The Doctor when he unlocks Janus Anna from the stasis pod. It might be because I found the opening episodes a bit of a confusing blur, but I still don’t understand the confession dial.

Engie: Me neither. It’s timey-wimey.

Alex: Is this deliberate vagueness to throw viewers off the scent/confuse them? The creation of the Janus race is a clever idea – obviously, named for the Roman god. I like this twist on seeing back and forth. There is a lot of compassion in this episode. Also, just a thought – hasn’t there been a lot of retconning with Twelve? A lot of wiping people’s minds?

Engie: …yeah, actually, there has been. I didn’t make that connection until you pointed it out just now, but there totally is.

Alex: You know, one day I’d like to see a modern-day episode set not in London. Somewhere less obtuse, somewhere in the UK less known. London is great and all, but there are segments of the UK that could be explored, too.

Engie: YESSSSS. And if they do more episodes set in the US, I hope they choose a location other than New York City or the Southwest. For that matter, I’d like to see more modern-day episodes that take place somewhere other than the UK or US.

Engie: What was your overall opinion of this episode?

Alex: I liked the episode, though there were bits that I found a bit slow, characters discussing the plot rather than going off and solving it. It wasn’t my favourite of series 9, but pretty nifty.It was definitely a clever episode, with little tricks. Well written in terms of plot, I’d say. Also, I just want to say that crows are my favourite birds, and ravens are very closely related, so yay, cretinous corvidae!

Engie: Personally, this was one of my favorite episodes from this series – or in a long time, TBH. I thought the acting was amazing, and I LOVED the concept of this episode. I wish we could see more of that world, but I also know that doing so would probably take away some of the mystery and charm! Also, I was impressed by Clara’s exit from the show. Her characterization has… not always been the greatest, but this was amazing.

What is YOUR opinion on “Face the Raven”? I’d love to know!