Posted on December 9, 2015 by nevillegirl

As I’ve mentioned before, November was an extremely busy month for me. With multiple midterms, papers, and creative writing projects due one after another in an extremely short period of time, I didn’t have as much free time as I’m used to. What free time I did have was spent either blogging or reading comic books – I didn’t do much else for fun last month.

For example, I started watching season zero of Carmilla in late October when it premiered, but I soon put that aside in order to have time to keep this blog updated. I told myself I could always return to the show later, and today I did. I needed a break from studying for finals, so I watched season zero and drank, like, three cups of tea in the hour that it took me to catch up on the show. (I was cold, OK? I also made myself a blanket nest.)

Anyway, I’m going to write down all my thoughts about season zero while it’s still fresh in my mind! You can read my posts about seasons one and two here and here.

I loved getting a glimpse of who the characters used to be!

UGH PERRY AND MEL WERE SO ADORABLE AS FRESHMEN. I mean, Mel was a nerd?! OH MY GOD. YESSSSS. (I loved seeing how she became the brash Summer that she is in later seasons!) And ohhhh my god, hippie Perry?! This season was a really fun flashback, and a nice break from the current “everything is terrible” plot that season two ended on – here, the threat is much easier to defeat. Aaaaand of course, Mel’s adorable geekiness was really sweet too.

Also, I’m glad that the writers eventually addressed why Perry didn’t seem to recognize Carmilla in season one, and why she was more normal in that season – she was majorly weirded out by all the events in this season that by season one, she was basically in denial that it had ever happened, or that she knew Carmilla from a previous supernatural encounter.

I have so much respect for Annie Briggs right now.

LIKE, EVEN MORE THAN I HAD BEFORE. I barely noticed her in season one, but by the end of season two I was amazed, because… wow. She’s basically played three different characters in as many seasons? Hippie Perry, normal Perry, and then the Dean of Silas. She inhabits each role so completely, too – she really gives it her all. Perry is now one of my favorite characters, and Annie Briggs is definitely my favorite actress on this show! I’m interested to see her acting in other/future roles.

AHHHH HER SARCASTIC ATTITUDE AND HER BADASSERY AND HER ALL-BLACK CLOTHES AND VERY VERY TIGHT PANTS AND HER PURPLE-Y PINK HIGHLIGHTS AHHHHH. I’M SO GAY. 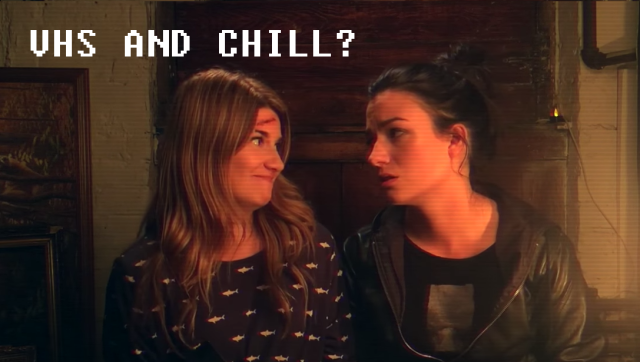 I loved the little hints of things to come.

Like when Perry is trying to cast a spell to reveal which one of them has come in contact with a supernatural being, and Carmilla is all like, “Oh, I don’t need that question answered.” There were a bunch of little references to the show’s mythology, and to Carmilla’s vampire-ness, AND I LOVED IT. The amount of foreshadowing was perfect!

The product placement in this season is hilariously blatant.

…I actually wrote a paper about the U By Kotex product placement in this season (and why it appeals to/fits this particular show’s audience so well) for my Media History & Culture class. (And I got an A+ on it, too!) Like, it’s so obvious that they’re just promoting a product – for heaven’s sake, it was even part of the plot – but I didn’t mind because it was so funny.

As always, Laura reminded me of myself.

TINY GAY JOURNALIST GOOFBALL. IT ME. Although I do have to say that I’m not sure if I’d rather have Laura or Carmilla as my girlfriend. I do love Carmilla’s snarkiness and broodiness, but I also love Laura’s cheerfulness and spunk. I DON’T EVEN KNOW. I’M TOO GAY TO FUNCTION.

Laura’s cameo at the end was adorable!

I actually already knew about this because I belong to a Carmilla fanclub page on Facebook, and some of the other members talked about it/posted screencaps from this scene. But it was still adorable! OMG HIGH SCHOOL LAURA ON A CAMPUS TOUR AHHHH.

All in all, season zero was a fun little story! (Unlike the prior seasons, this one had only twelve episodes, not thirty-six.) I somehow managed to avoid any spoilers from the Facebook group besides Laura’s cameo and the bit about Carmilla meeting her match. (Which was hilarious, by the way: “…an annoying shrill of a girl, one who truly challenges you.” OMG OMG OMG OMGGGG.) So that was nice – I didn’t know any of the plot twists, or that the faerie queen was even a thing, or whatever.

The plot zipped along in all twelve episodes, and I laughed a lot, and it made me so so excited to see more of these characters in season three! (I can’t wait until we get a definite release date for that!) I’m so glad that I started watching Carmilla in the first place, and it makes me so happy to see how popular my favorite show has become!

Have you seen season zero of Carmilla? If so, what did you think of it?