I’ve been meaning to post either my college essays or excerpts from them anyway, and apparently today is National Siblings Day, sooo… it is as good a day as any to post the essay I wrote for my Wonder Woman class!

Originally I was just going to write about Princess Leia but the more I thought about it, the more I realized how fun it would be to write about both her and her brother and compare them to characters from one of my favorite things of all time – Greek mythology! And thus this essay was born. (Shout-out to The Force Awakens for making me relive my childhood: I’ve had Star Wars on my mind a lot lately and it’s so much fun to analyze it…)

Twins have always fascinated humanity. In many ancient cultures they were considered auspicious, and twins in mythology are often characterized as two halves of the same whole. Twins are thought to have a unique and intense bond, allowing them to understand one another better than anyone else can. Because of this, twins make a formidable pair.

Two examples – or should I say twin examples? – of famous literary twins are Apollo & Artemis from Greco-Roman mythology and Luke & Leia from Star Wars. There are several similarities between the two sets of siblings, including their interactions with each other, the motifs commonly associated with each, and their parentage.

I think it is safe to say that all these similarities were intentional on the part of George Lucas. That man knew what he was doing – after all, he read Joseph Campbell’s seminal work The Hero with a Thousand Faces in college. Although twins are not mentioned in that book as far as I know, they are discussed in some of Campbell’s earlier writings, and Lucas read the original myths too, of course, so he would be familiar with the prevalence of twins in Greek mythology.

The ancient Greeks viewed Artemis and Apollo’s contributions and continued cooperation as necessary for the world to keep functioning: Apollo was in charge of the sun and the day, while Artemis controlled the moon and the night. If they ceased to do this, the natural order of the world would be thrown out of alignment.

Just as Apollo and Artemis play a necessary role in the function of the universe, so too do Luke and Leia – although their father was the Chosen One who brought balance to the Force, their work ultimately played a large role in it as well.

Mary Henderson, the author of Star Wars: The Magic of Myth, was quoted in a 2007 documentary titled Star Wars: The Legacy Revealed as saying that Luke and Leia “are, of course, Apollo and Artemis, the divine twins of mythology who come into the world, male and female, to restore it to order.”

Leia’s strong leadership skills and diplomacy tactics helped organize the Rebel Alliance into a cohesive force that was capable of standing up against the Galactic Empire, while Luke’s Jedi training allowed him to fight their enemies face-to-face. If the twins did not exist – if Padmé had died before giving birth to them, or if they had never been conceived at all – that galaxy far, far away would be a different place indeed. 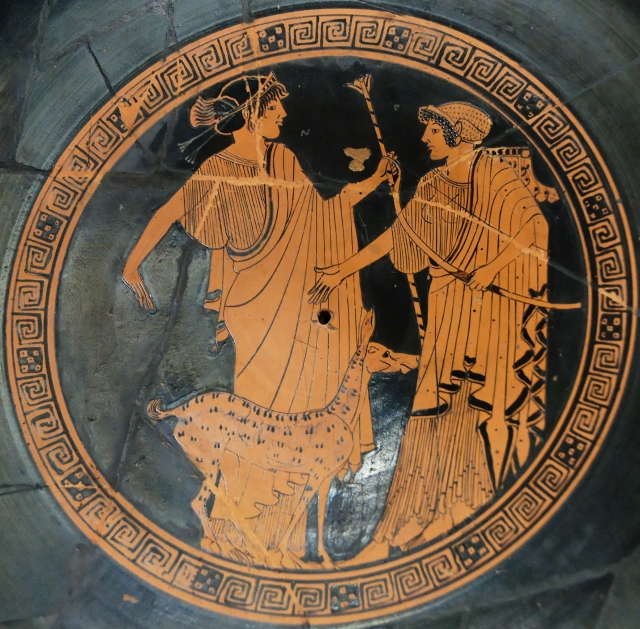 One of the most iconic scenes, if not the most iconic, from the trilogy shows Luke standing outside his home on Tatooine, watching the binary sunset. This hints at Apollo’s role as the sun god.

The parallels between Artemis & Leia are a bit trickier to find, but look hard enough and you will see that Leia is associated with her time on the Death Star (“That’s no moon…”) and the forest moon of Endor from the battle that takes place during Episode VI.

Some other parallels I observed included Artemis’ role as a warrior and Leia’s clear ability to defend herself, Apollo’s association with the Oracle at Delphi and Luke’s ability to sense something before it happens through his use of the Force, Artemis’ status as an eternal virgin and Leia’s initial disgust at rejection of Han Solo, and Apollo’s status as the god of healing and Luke’s status as the only person who was able to talk his father out from under the destructive grasp of Emperor Palpatine.

Last but not least, some important parallels can be drawn between the parentage of each set of twins. When Leto was pregnant with the twins Apollo and Artemis, she was tormented by a serpent sent by Hera and could not find refuge anywhere. Eventually she did find a safe place to give birth – the island of Ortygia.

This reminds me of Padmé’s struggle against Anakin and Obi-Wan eventually whisking her off to a safe, secret place where no one, not even the father of her children, knew where she was. She needed to be protected.

Another similarity between these two women is how they are largely forgotten about by both the citizens of the fictional world they come from, and the readers and viewers of our world. They are viewed pretty much only in the relation to their children and the father of their children, and are otherwise not often spoken of.

After Anakin became Darth Vader, he rose to an almost godlike role in the universe. He controlled the fates of many who were beneath him through his use of the dark side of the Force, and his wrath is comparable to Zeus’ divine wrath that occurred, well, whenever anyone happened to displease him in the slightest way. Both of these men have very short tempers!

In conclusion, Luke & Leia may be viewed as a more modern, science fiction version of the twins Apollo and Artemis. Both sets of twins share similarities in terms of their interactions, the motifs and traits associated with each, and their parentage. Star Wars was influenced not just by Joseph Campbell’s ideas about the archetypal hero, but by other character archetypes as well, such as the ability of twins to unify the world.

Happy National Siblings Day! Who are your favorite fictional siblings… and fictional twins, in particular?! And are you excited for the upcoming Star Wars movies? Or The Hidden Oracle, the first book in Rick Riordan’s new series about Apollo?

6 Responses to Twins & The Mythological Foundations Of “Star Wars” | #NationalSiblingsDay