Posted on October 9, 2016 by nevillegirl

October is one of my favorite times because the Iowa City Book Festival is held at the beginning of the month! I’d never even heard of it until I moved here last year, but now I’m all about it. I’ve been saying only half-jokingly that it’s better than Christmas because A) you get to talk to all sorts of authors and B) the weather is nicer.

On Thursday and Friday, I met two of my favorite authors, Roxane Gay and Rick Riordan, and so today I’m going to tell you all about it!

I attended a two-hour writing workshop and Q & A session on Thursday afternoon at the public library. The first hour was spent discussing diversity, representation, stereotypes, misconceptions, and storytelling, accompanied with bursts of freewriting. About half of the participants were high school students (!!!!), while the rest of us were undergrads, grad students, or recent graduates.

During the second hour, Roxane Gay visited us and answered any questions we had. We also had the opportunity to read some of our writing to her if we wanted – something written either during the workshop or on our own time before.

I read a short piece inspired by Chimamanda Ngozi Adichie’s TEDTalk “The Danger of a Single Story,” which we’d watched and discussed during the workshop. You can read the edited piece below:

“As a child I did not have access to stories about girls like me. I did not know that these stories existed until I was thirteen and when I did find books about girls like me, I hid them under my bed so that my parents wouldn’t find them and even then I was still worried that someone would find them. Until I was thirteen all the stories I ever read were boys with girls, girls with boys – nothing about about girls with girls and boys with boys.

When I did find those books I believed something untrue. I thought that people like me weren’t supposed to have happy endings because we always died in books and movies and on TV. That is the danger of a single story.

I identified with these characters because they were like me, but I wasn’t supposed to identify with them because I wasn’t supposed to be a girl like me. And now I write books about girls like me who get their happy endings with other girls and I don’t have to hide the books I read anymore.”

My knees shook so badly when I read my piece! My palms were sweaty and I thought my voice was going to give out because I was so nervous. I still can’t believe this really happened. Reading my writing to one of my favorite authors is an experience I probably won’t have again for a long, long time, if ever again, so I know that I’ll always treasure this opportunity.

She autographed my copy of Bad Feminist!

And then I shyly asked for a selfie! My selfie skills SUCK and this was just another picture in a long tradition of taking terrible selfies with famous people I admire. But she did compliment my MBLGTACC shirt (!!!!!) and we struck up a little conversation about how much living in Indiana sucks. (She actually teaches at my brother’s school, which is kind of funny because if I went there I’d try to get into as many of her classes as possible, but my brother the Computer Science major could care less.)

The tweets below are from a podcast taping at a nearby bookstore. I couldn’t attend because I was in my Intro to Multimedia Storytelling class at the time, but I just can’t resist including them in this post because HER FACE in those pictures. SHE LOOKS SO PROUD OF HERSELF.

And some more boobs. pic.twitter.com/IypT6hAtUo

On Friday night, Rick Riordan visited Iowa City as one of the stops on his book tour for The Hammer of Thor, which had been published just a few days before. To promote The Hammer of Thor, he’s visiting nine cities across the US in a total of nine days. This was the first time he’d ever stopped in this state as part of a book tour!

Just landed in Iowa and two ravens flew overhead. Not even kidding. Odin must be pleased.

I’ve been reading his books since I was twelve, but never thought I would have this opportunity. He was already famous before I turned the first page of The Lightning Thief more than eight years ago, and since then he’s just become even more so. With each new series I hoped that he would come to a city near where I lived, but the closest events I could find were in Chicago – which, admittedly, is only an hour away from my hometown, but those events were always sold out by the time I heard about them.

So when it was announced this past summer that he would be here, I bought a ticket right away – somehow managing to snag a front-row seat! The ticket also guaranteed a signed copy of The Hammer of Thor. And free Hotel Valhalla shirts were handed out at the door! 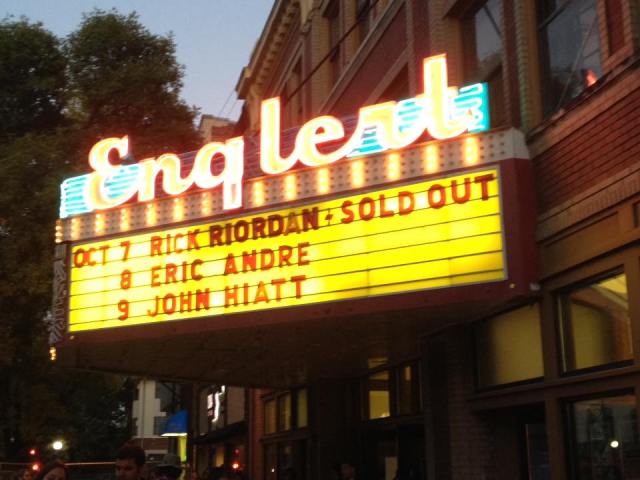 I was one of the few people at the event who was not accompanied by their parents. In fact, I ended up debating the merits of Percy Jackson vs. Heroes of Olympus with the eight-year-old sitting next to me, and it was kind of adorable to hear him exasperatedly correct his mother when she got the two series mixed up.

I’d attended another author event at the same theater this spring, featuring Alison Bechdel, and the two were markedly different. Not in a bad way, though – not at all. Both events were filled with infectiously enthusiastic people, but there were way more kids at Riordan’s event. The noise level was higher for that event, too.

Bechdel’s event consisted mainly of her making witty comments as she showed us the evolution of her art and discussed her two graphic novels in depth. Riordan, on the other hand, gave an overview of what he’d been up to the past year and what the coming year has in store for him, then soon transitioned to Q & A. I GOT TO ASK HIM A QUESTION. AHHHH. My question was actually the last one he ended up having time for! I felt so lucky to be chosen. 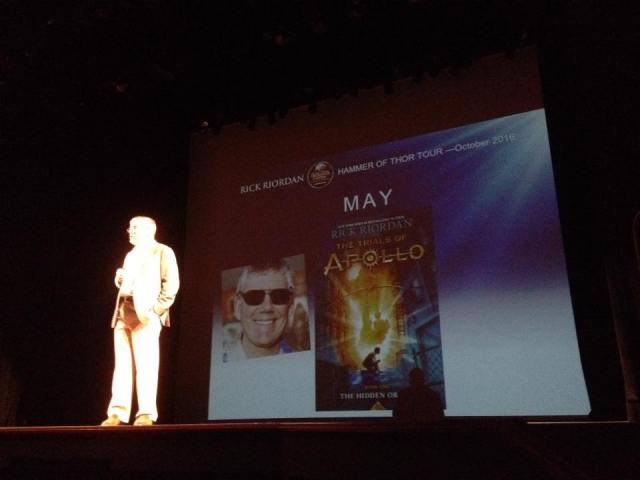 I asked, “What is the funniest or weirdest thing you’ve ever put in a first draft but never ended up using?” and he said that in an early draft of The Last Olympian there was a scene where Percy and Grover found Nancy Bobofit, the bully from The Lightning Thief, lying in the street during the Battle of Manhattan.

In that version of the story they debated whether to move her out of harm’s way or draw a moustache on her, and the scene was meant to show how Percy had grown up since the series began. Ultimately, though, the scene slowed down the action and didn’t really fit anyway.

I’m still in awe that this happened. I mean, Rick Riordan is basically one of my writing heroes.

I was also very happy about how much time he spent talking about diversity. He spoke about his new publishing imprint, designed to find up-and-coming authors to write stories concerning mythologies he didn’t feel comfortable writing about.

I’m going to do a whole post on this very soon, but let me just say that I appreciated that he explained cultural appropriation on a level preteens could understand. He talked about realizing that he just wasn’t as familiar with some of the stories from other mythologies – having not grown up surrounded by stories from, say, Aztec myths – and knowing that someone else would do a better job of telling those stories.

This was HUGE for me because I really admire his development in terms of writing diverse stories. He’s proven that he’s always willing to listen, and to grow and change as a writer, and do better than he did before.

This weekend was one of my favorites ever, and definitely the best in recent memory. It’s so bizarre to think that I met not one, but two of the authors I most admire and seek to emulate – and, better yet, that I was able to talk to them and ask some questions!

Just over a year ago I read Bad Feminist during one of my first days on campus (it was required reading for my Intro to Gender, Women’s, & Sexuality Studies class), and now here I am reading my writing to its author. Less than a year ago I took one of my best bookish photos after buying The Sword of Summer on the day it was published, and now here I am asking the author about first drafts. It’s difficult to wrap my mind around these facts. I’m so happy. Iowa City is truly a wonderful place to be if you love books!