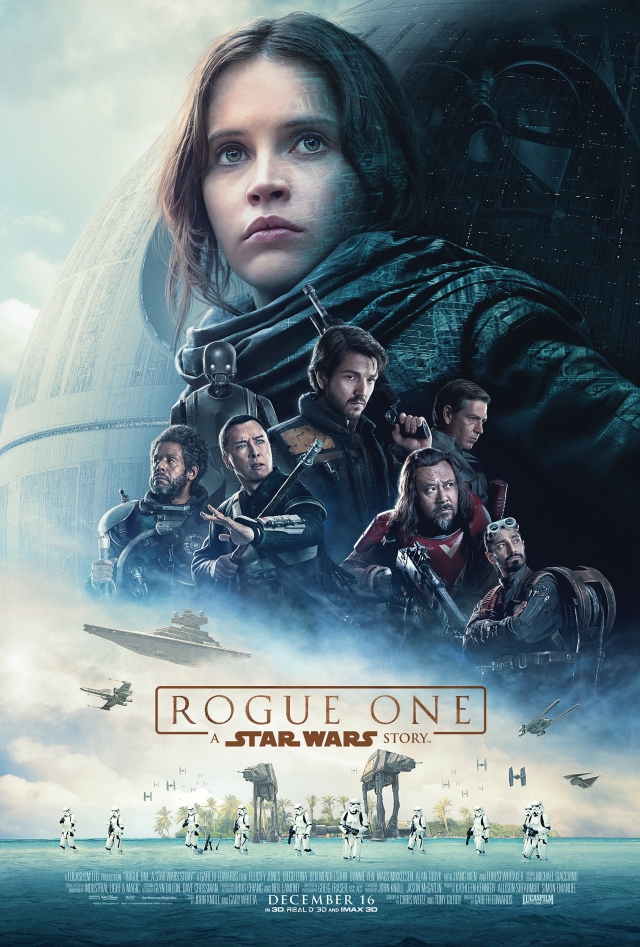 I finally saw Rogue One today! We’ve had bad weather here the past few days, so going to the movies was out of the question until recently. I’ve been excited for this movie for quite some time and have decided to write a review while it’s still fresh in my mind, even if that puts me behind on my other reviews. (I promise I’ll talk about Fantastic Beasts and Where to Find Them and Moana soon!)

Unlike the other two movies I just mentioned, I’d actually seen the trailer for Rogue One prior to watching it, but I’ve been so out of it in every way lately that I’m not the most up to date on what’s happening in even the books, movies, and TV shows I’m most excited for… TFW your brain doesn’t function well but it does help you avoid plot details! I had only the vaguest idea of what this movie was about – a group of rebels stealing the plans to the Death Star – which made it all the more enjoyable. No “Han Solo dies”-type spoilers for me!

I thoroughly enjoyed Rogue One. That said, at the end of this movie I did not feel as I had expected to feel after finishing it. Which is my fault, and not that of the filmmakers. I’m just noting that here because I think it’s important to discuss first impressions, especially if they turned out to be wrong.

I always enjoy seeing glimpses of other planets and what life is like on them, so that was one of the best parts of this movie IMO. I’m like 99% sure that I’ve talked about this subject before on this blog, but: I’m really into fantasy and science fiction that captures the sense of wonder about the world that is felt during childhood, and Star Wars has always done that for me.

I did struggle to keep track of all the characters’ names and identities/loyalties but as I mentioned earlier, I’ve been feeling super out of it so maybe that was just me.

I liked the music! Michael Giacchino’s score often seemed about to veer into the “May the Force be with you” motif, which was AMAZING and made me emotional. It’s good to nice that if need be, someone is capable of handling the scores for the rest of the third trilogy – god forbid anything should happen to John Williams, of course but 2016 has been such a trash year that I wouldn’t even put it past it.

I’M SUPER GAY FOR JYN ERSO. I wasn’t sure where else that thought should go in this review, so I decided to put it here because it’s very #important to know. I have a type and it’s “fictional brunettes who could kick my ass, probably.”

I’m happy that this movie had a female lead and included POC characters but I could have done without the Mystical Asian trope.

The movie was slow to start and did drag a little in the middle. On the other hand, I’ll never say no to MORE STAR WARS. Two hours and thirteen minutes of a star war? Sign me up.

From here on out, everything I want to talk about is HEAVY SPOILER TERRITORY, so I’m going to change the text color from black to white and you can highlight it if you’ve already seen the movie and want to know the rest of my thoughts on it.

OH MY GOD I CAN’T BELIEVE EVERYONE DIED. I STILL CAN’T BELIEVE IT. This is exactly why I’m so glad I neither saw nor heard any spoilers before watching this movie, because all of the deaths had a much greater emotional impact on me than they would have otherwise had. Especially at the end! I fully expected a Rebel spacecraft to swoop in and save the day but no one came for Jyn and Cassian.

Not to be too depressing, though, but that’s life for you. We all like to think that we’d be a Skywalker, that we’ll miraculously survive even the most deadly and hope-crushing battles the galaxy has ever seen… but let’s be honest, very few of us likely would. In the credits of a movie like this my character would be referred to as “civilian #3” and would die within the first fifteen minutes. Rogue One acknowledged that not everyone is gonna make it, but that doesn’t mean they weren’t important – after all, without the plans Jyn stole, the Rebel Alliance would have no way of destroying the Death Star and ultimately the Empire itself.

I was really impressed with how well this movie lined up with A New Hope, which is my favorite Star Wars film by far, as well as one of my favorite movies in general. And I’m not just talking about the CGI for Tarkin and Leia, although that was remarkably well done. Also, every time Bail Organa appeared onscreen I went THAT’S BAIL ORGANA.

I rewatched some clips from A New Hope this evening and was pleased to see that, if anything, the end of Rogue One fit even more seamlessly into the beginning of Episode IV than I had originally thought after watching the new movie. The scene with Leia and the Death Star plans! The opening crawl! AHHH I’M SO SO HAPPY ABOUT THIS.

It almost makes up for every character I loved dying. Almost.

Overall, I enjoyed Rogue One about as much as I did The Force Awakens! I can’t wait for the upcoming movies. In the meantime, I need to get my hands on some more of the comics because I’ve loved all the Star Wars comics I’ve read so far. Really need to rewatch A New Hope as well… but then again, I don’t need any excuse to do THAT.

1 Response to Movie Review: Rogue One