Posted on November 8, 2017 by nevillegirl

It’s been exactly one year since the last US presidential election, which is hard for me to believe. Time seems… stretchy, almost, easily compressible but just as easily drawn out, since it seem both too soon and not soon enough to mark this anniversary.

The day after, too, especially considering how I didn’t go to bed until three in the morning on election night because I was glued to CNN and then had to get up for an 8 AM class.

From November to January, I was the most depressed I’d been in months – certainly since I’d sought mental health help at my school beginning in February 2016.

I’m doing better now, for a variety of reasons. Medication, for instance. Last fall/winter I still hadn’t found one that worked but now escitalopram seems to be helping, so that’s good.

But yeah. After the election, I felt overwhelmed. Crushed. It didn’t help that the weather in Iowa in November is always miserably cloudy, gray, cold. Rainy.

And then there’s the stress of school, oh god. Thankfully, midterms were already over – I took all of mine around the middle of October – but there’s always something going on. My professors like to assign lots of projects due either just before or just after Thanksgiving break, hurrah. Not. 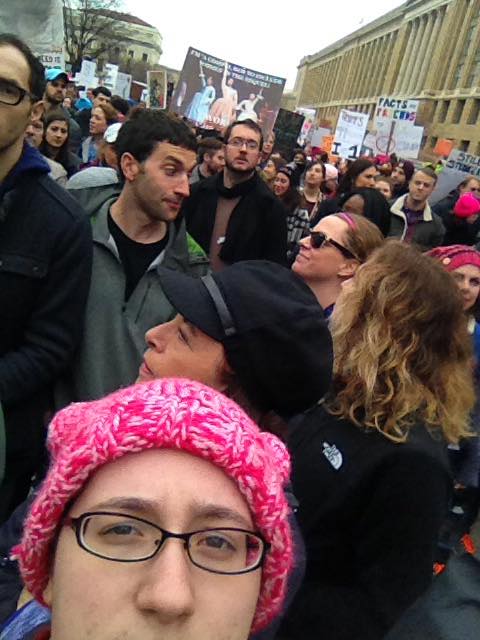 @ the Women’s March on Washington in January, fighting back !!!!

So far, this fall has been very different from last fall. Without constant thoughts (read: worries) about the election hanging over me like a cloud, it’s been easier to focus on the rest of life: School, work, spending time on my friends, spending time alone working on one hobby or another.

I can’t truthfully say that this fall has been free of worrying about and dreading Donald Trump. After all, now that he’s actually in office he has more power than ever before. Who knows what he might do next? (I don’t think even he knows. Which, again, is worrying.)

But that worrying is different, somehow. Perhaps it’s because last November eighth showed us exactly what half of the country thinks, feels, and believes – with more clarity than we’ve had before. It’s terrifying knowing that there are actually people out there who support Trump/Pence, but at least now I know even better who to avoid.

I’m so glad it’s not 2016 anymore. I’m so glad that hell year is over. Yes, there were some good parts, but not a lot and certainly not as many as I would have liked. I’m very grateful this semester has been much more relaxed. Even as I enjoyed being back at school, seeing the leaves turn color and fall from the trees, et cetera – all my favorite signs of fall – I couldn’t help but get a little more anxious with each passing day. By the time November eighth rolled around… aaahh. I’m sure I’ll feel like this all over again come late 2020, but for now I’m focusing on this year and this month and this day.