Posted on December 9, 2017 by nevillegirl

Reading The Rainbow is an original regular feature at Musings From Neville’s Navel. I’m a lesbian bookworm who loves to geek out about books and gay stuff, so why not talk about both subjects at once?! Basically, I review books with LGBTQ+ characters and/or themes, discuss the pros and cons of each, and tell you which stories are worth your time! 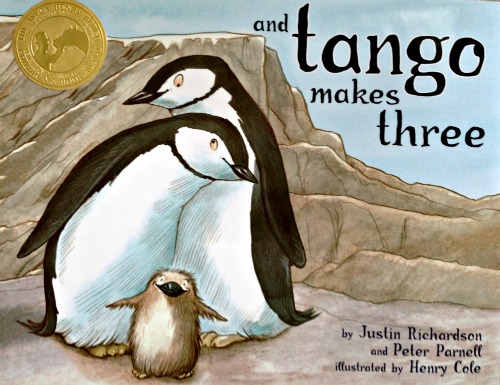 In the zoo there are all kinds of animal families. But Tango’s family is not like any of the others. This illustrated children’s book fictionalizes the true story of two male penguins who became partners and raised a penguin chick in the Central Park Zoo.

Previous Reading The Rainbow posts may be found here.

And Tango Makes Three is something of a classic in the (still unfortunately tiny) subgenre of LGBTQ+ picture books. It was by no means the first but has been challenged or even banned a number of times. Some years it was the most challenged book in the United States, according to the ALA!

Based on a true story, And Tango Makes Three follows Roy and Silo who, unlike all the other male penguins, pair up with each other instead of with female penguins. When a zookeeper noticed that they built a nest and kept sitting on a rock, trying to hatch it, he took an egg from the nest of another couple that had more than one and gave it to them. That egg eventually grew up to be Tango!

And that’s pretty much it. I mean, there’s only so much you can fit in thirty-two pages.

I loved it. It’s been on my TBR for quite some time and I’m so happy I finally read it! I mean, who doesn’t love learning more about how gay the animal kingdom is? The illustrations are flippin’ ADORABLE… tiny fuzzy penguin chicks?! HEART. EYES. EMOJI.

Best of all, And Tango Makes Three doesn’t talk down to kids. I cannot express how much I HATE it when picture books, chapter books, et cetera do that. I promise you, little kids have brains. I know it may not always seem like that because they fall over a lot and sneeze on people and… do I need to go on? Like, yeah, kids are weird and kinda gross but one thing they definitely aren’t is tolerant of being patronized.

They know when they’re being condescended to, even if they can’t articulate it in quite those same terms, and so I despise picture books haphazardly thrown together by someone who thinks it’s as simple as drawing a few pictures and using really short words.

(I have Opinions about this, all right? I seem to be one of the few English majors at my school with an intense interest in writing for babies, kids, and teens and so whenever the subject of shitty children’s books comes up all eyes are on me because people know I’m about to launch into another rant.)

There’s actually quite a bit of text on each page of And Tango Makes Three, which means the authors have room to tell an engaging story. I wish that weren’t such an unusual thing, but it’s not uncommon for me to leave the library loaded down with twenty or forty children’s books, devour them in an afternoon, and pronounce all but five of them complete and utter trash.

I would recommend this book to…

I don’t have any small children in my life right now (no nieces or nephews yet and no young cousins anymore) but god, if I did I’d totally curl up on the couch and read And Tango Makes Three to them. It may not quite make it to my list of all-time favorite picture books, but it’s a heck of a good time. SMALL FLUFFY GAY PENGUIN CHICKS CALL UPON YOU TO DO THEM A FAVOR AND READ IT.