Spring Into A Summer Of Rereading

I plan to read many books this spring and summer. I always do. There’s The Silmarillion to begin and the Heroes of Olympus series to finish and the Maggie Stiefvater books that I haven’t already read. There’s Insurgent and Allegiant. The Maze Runner. Paper Towns. These Broken Stars. St. Mallory’s Forever. And so on and so forth.

But there are also a number of books I would like to reread. In some cases, I want to experience their awesomeness a second (or third, or fourth, or umpteenth) time. In others, I do remember liking the stories but I don’t remember the plots, so it might be like reading them for the first time (which is always fun!). Either way, much rereading lies ahead for Engie.

The Hobbit and the Lord of the Rings trilogy by J.R.R. Tolkien

I love these books – The Return of the King is one of my top five favorites – but boy, were they hard to read. I pushed my way through page after page, enduring just as many if not more sections than I enjoyed. Overall, it’s a really awesome tale, but the first time around I was too focused on the big picture and didn’t stop to smell the roses (aka the little details).

Also, after I reread the books I’ll be in the mood for a movie marathon and the films are spectacular. Sometimes I can even pester my brother into watching with me.

(Side note: Agh, I can’t believe the third and final Hobbit movie comes out later this year. I’m not ready for There And Back Again. I won’t ever be. I’ll probably cry.)

Why? Because I consider The Lightning Thief one of the best series openers ever, in any genre, for any age group. Because I didn’t like The Sea of Monsters but maybe my perception of it has changed. Because The Titan’s Curse was my favorite in the series (thanks in part to Artemis and Zoe being adorable quasi-girlfriends). Because I don’t remember a single thing about The Battle of the Labyrinth and The Last Olympian except that, well, there was a battle in the labyrinth and apparently only one Olympian.

And of course, because The Blood of Olympus – the final book in the spin-off series, Heroes of Olympus – comes out this fall and it seems only fitting to return to the original series, to brush up on my Percy Jackson fangirling.

I have never reread this series all the way through. Can you believe that?

I have reread the individual books, but not in order and not all of them. (I’ve probably reread the first, third, and seventh the most.) I get distracted easily, OK? But this time, I’m going to read them all straight through, in order, and not procrastinate – this has been a goal for the past few summers, but hasn’t been accomplished yet because newer books always call to me more.

Mostly, I’m just excited to see how J.K. Rowling drops hints early on and ties everything together so neatly later, because I remember that that was one of my favorites aspects of the books.

The Chronicles of Narnia by C.S. Lewis

I realized something the other day – for as little as I remember of the sixth and seventh books, I may as well have just not read them. That’s unfortunate, so I’ll change that with a rereading. A thorough rereading, not my typical let’s-hit-all-the-high-points-i.e.-the-second-third-and-fifth.

Also, I’m curious to see how much of the Christian allegory is apparent to me now that I actually know about it. I had no idea the first time.

Why not? There’s only three books, they’re not all that long, and they’re written fairly 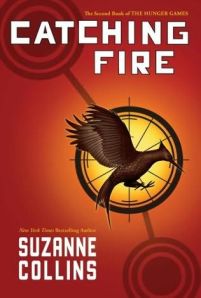 simplistically. I could probably get through all of them in a day, so maybe I will. Panem is at once both horrifying and fascinating – I love it. Also, I want to compare it to something else.

The Underland Chronicles by Suzanne Collins

I would like to reread her earlier series and compare it to The Hunger Games and its sequels. For example, Ripred and Solovet reminded me of Haymitch and Coin, respectively, and both series are heavily influenced by Greco-Roman mythology.

The Giver by Lois Lowry

Again, another quick read. I know this story so well I scarcely need to reread it – I can tell you the minutia of practically every chapter – but I would like to anyway, for nostalgia’s sake. The book’s premise may not be comforting, but the style of writing is. It’s so familiar to me, and I’ve always admired how Lois Lowry fits words together.

Plus, rereading this will make me even more of an annoying little nerd when I see the upcoming film adaptation in August. Someone may have to restrain me from ranting in the theater and throwing popcorn at the screen.

The Miseducation of Cameron Post by Emily M. Danforth

I have three main reasons for rereading this. First, it is a very summery book. The story doesn’t take place during that season alone – it’s actually spread over four or five years – but overall that is how I remember it.

Secondly, I’m jealous of Danforth’s writing style. I love it to pieces. It’s so vivid.

Finally, it’s a very feels-y book. I read a lot of books (mostly fantasy) where characters die left and right and although Miseducation actually opens with two deaths, they don’t have much bearing on the tragic-ness of the plot. It’s sad because… because Cam is growing up as a lesbian in this really conservative small town, and told to hate who she is, and Emily Danforth why would you do this to me.

The first five books are utterly wonderful. The characters are complex and flawed, Colfer has a quirky sense of humor, and Artemis’ transformation from potential villain to do-gooder is perfect.

Meanwhile, I don’t remember much about the sixth and seventh books. I felt their plots were really hard to follow – paradoxes and weird timey-wimey things and whatnot. Maybe I’ll understand them better this time.

And I haven’t read the final book, The Last Guardian, yet so I need to catch up!

The Raven Boys and The Dream Thieves by Maggie Stiefvater

I would just write “The Raven Cycle” here, except that seems weird because only the first two books out of four have been published. Both The Raven Boys and The Dream Thieves are in my top five favorites – I can’t decide which I adore more. I love the characters, the setting (which is almost a character in itself), the writing style, the everything.

Rereading it will help me update my theories as to what happens in book three, too. Eeee, I can’t wait for the next one – it comes out a few days before my birthday so I might ask for it as a present despite having not read it yet (something I rarely do) because Stiefvater’s books are just that good. (Postscript, 4/8: Turns out I was wrong about the release date. It doesn’t come out until almost November.) I’m trusting that this one will be just as polished.

What books do you plan to reread during the next few months, or in 2014 in general?

17 Responses to Spring Into A Summer Of Rereading